KML Regions can greatly improve the user experience. This feature allows you to limit the visibility of densely positioned placemarks to low altitudes, split high-resolution images and load them in increasing levels of detail using Super Overlays, and dynamically load new KML files based on the viewer's location. Here are some examples of datasets that use regions:

Since there is no user interface for creating regions in Google Earth, this tutorial explains how to create a region by modifying another KML feature with a similar structure - the GroundOverlay.

In order to complete this tutorial you should:

If you've ever seen an image overlay in Google Earth, you might have noticed that they are usually rectangular. You set the size and position of an image overlay by specifying the north, south, east, and west edges of the image.

Note: Image overlays in Google Earth are created in KML using the <GroundOverlay> tag. This tutorial uses both terms interchangeably.

Find the bounding box in an image overlay example:

Revert to the original image overlay:

Regions control the visibility of placemarks and other KML features by defining two parameters:

Regions define either a flat rectangle (2-dimensional area) or a 3D box (3-dimensional volume) on the map. Because regions are invisible, look at the the rectangular KML polygon (below left) and extruded polygon/3D box (below right) to visualize a region. Both have the same north, south, east and west boundaries, but the “Region” box (right) also has an altitude value specified, which gives the region height. 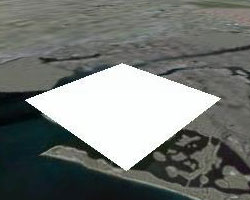 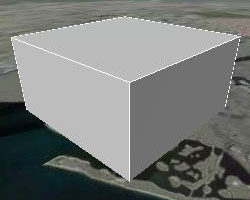 Regions also specify how big their rectangle or box must look on your screen before it is considered active or inactive. This measurement is the square root of the area the region consumes on your screen, measured in pixels. 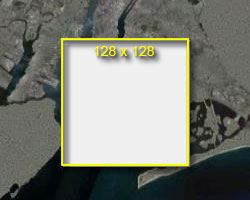 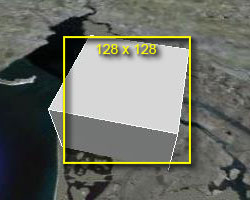 Why should you use regions that are not flat? Because 3D boxes are useful when applying regions to 3-dimensional Sketchup models. Regions are used to turn features on or off depending on how close you are to them.

With a 3D model like the Empire State Building (shown below), if the camera is tilted close to the horizon (that is, tilted upward), you can be very close to a model with a flat region (left) without it being large enough on the screen to activate. By making the region a 3D box that surrounds the 3D model, you can look at the model from the side, and still activate the region at a reasonable distance (right). Learn more about creating 3D regions using the <minAltitude> and <maxAltitude> tags by reading the Regions section of the KML Tutorial. 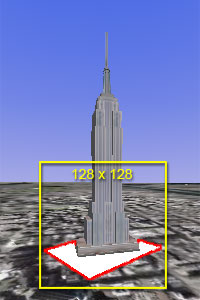 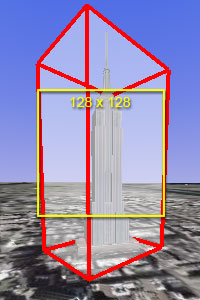 The KML for a <GroundOverlay> and <Region> is very similar. They both use a bounding box to define the north, south, east, and west edges. Take a side-by-side look at the way that a simple GroundOverlay (left) and a Region (right) are represented in KML:

In a ground overlay, the bounding box is called a <LatLonBox>. In a region it is called <LatLonAltBox>. By optionally adding <minAltitude> and <maxAltitude> tags to a Region's LatLonAltBox (not included above), you will create a 3D region for use with 3D Sketchup models.

Create a Region By Modifying a GroundOverlay

Now that you have seen the similarity between regions and ground overlays, you can learn how to use one to create the other. Download the Image Overlay Example KMZ file, if you haven't done so already, and then download the following Brooklyn Hospitals and Screen Overlay Size Guide KMZ files:

Load all of these files in Google Earth. Once the Brooklyn Hospitals file loads, zoom away from New York City to see how all the icons and labels overlap each other and are not easily visible from higher altitudes. You can improve the experience by using a region to control when these placemarks are visible.

The overlay is a little over-sized and off-center for our hospitals. So the first step is to fine tune the image overlay's placement and size. 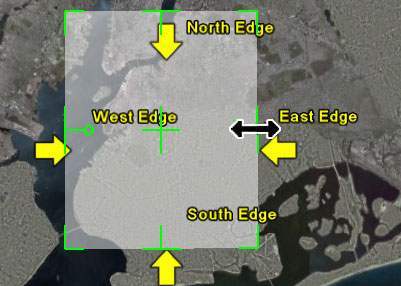 Specify your level of detail

Copy the image overlay to a text editor

Add your new region to the Brooklyn Hospitals folder

Test out your new region-enabled KML

What else can regions do?

Regions work on more than just folders. You can add them to any feature in Google Earth, such as: 3D models, placemarks, image overlays, polygons, and paths. Simply paste a region inside the feature's KML tag. Remember that a region specified inside a feature (like placemarks, models, and so on) overrides a region placed inside its parent folder. So you can specify a single region for many less important placemarks in a folder but still have a single important placemark visible at further distances.

Q: When should I use regions?

Regions have lots of uses, many of which are beyond the scope of this tutorial. A short list includes:

Q: What are good values for min/maxLodPixels pixels?

Q: Can I make a feature disappear as I get closer to it?

Yes. Instead of using <minLodPixels> in your Region, use <maxLodPixels>. Then, when the screen area of the region reaches the specified pixel value, that feature or folder disappears. This method is handy for features like low-resolution maps or historic satellite images that you want to appear on the Earth from far away but disappear when you get close to the ground, where it would obscure the high-resolution satellite imagery.

Q: What happens if I specify both a <minLodPixels> and <maxLodPixels>?

When you specify both a minimum and maximum LOD value for your region, the feature appears when the size is at the <minLodPixels> and disappears when it reaches the <maxLodPixels>. Just make sure that the maximum value is always larger than the minimum.

This method is useful when you want to have multiple levels of detail in your KML. For example, at high altitude, you could represent a 3D Sketchup model of a pyramid with just a simple placemark. As you get closer, you could switch to a simple outline of the pyramid using a flat polygon. At close range, you could show the actual 3D model. In this case, you would use three regions with the same <LatLonAltBox> and different but overlapping <Lod> settings:

Q: How do I make my features visible no matter how far in or out I zoom?

If you don't specify a maximum LOD value, the default is set to -1. This means that the feature will be visible no matter how far in you zoom. If you want to explicitly specify it, use <maxLodPixels>-1</maxLodPixels>.

If you don't specify a minimum LOD value, the default is 0. This means that the feature is visible no matter how far away you zoom from it. If you want to explicitly specify it, use <minLodPixels>0</minLodPixels>.

As explained in the KML 2.1 Tutorial, you can specify a fade extent for your region. This means that instead of instantly appearing or disappearing, some features slowing fade in or out. However, only image overlays, screen overlays, polygons, and paths fade in and out. 3D models and regular placemarks appear and disappear instantly.

Q: Why does my region appear at low altitudes when I am using a smaller monitor?

The area of a region on a screen depends on the size of Google Earth's 3D viewport. Therefore regions will activate and deactivate at different altitudes depending on screen size. You can experiment with this by minimizing your Google Earth window and dragging the lower-right corner to resize it. Because the camera's altitude doesn't change when you resize Google Earth, everything has to shrink to keep the same distance from the Earth. Because of this differing behavior, be sure to check your regions at average monitor sizes; most Google Earth users have a monitor display of 1024x768. To get an idea of how things will work on their screens, resize Google Earth's viewport to 640x480 or 800x600. You can change the viewport size by selecting View > View Size > Computer Playback in Google Earth and then selecting a display size.

Download this sample KMZ file for some examples relating to these questions.

Regions are capable of much more than simply turning off individual features at a specific zoom level. By using network links and regions together, you can create a nested system of KMLs that can load placemarks or image overlays (called Super Overlays) in increasing levels of detail as you zoom in.

Super Overlays are too complex to create by hand in KML. A few tools are available to make Super Overlays automatically. They chop up high-resolution imagery tiles and generate KML with Regions to activate the these tiles in increasing levels of detail as you zoom in. Please note that the three Windows-based products are not officially endorsed by Google.

The Regionator Python library also has the ability to divide thousands of placemarks, polygons and paths into separate regions for better viewing. For example, if you wanted to create a KML layer that had all the hospitals in the United States—perhaps tens or hundreds of thousands of points—without a completely overwhelming experience at high altitude, Regionator would be a great tool to use.

Regionator also offers many other KML tools, such as a link checker which will search your KML for hyperlinks, images and link to other KMLs and report missing files or bad URLs. Keep in mind that this is a programming library in the Python language, which means you need some experience with programming and using the command prompt in order to use it.

Have questions about this tutorial? Want to give us some feedback? Visit the Google Earth Help Community to discuss it with others.